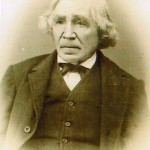 Ludwig Heinrich Riedesel was born July 12, 1818 in Wunderthausen as the oldest child of Ludwig and Florentine (Althaus) Riedesel. His father became the heir to the house called Haase by marrying the oldest child of the Althaus family. There were eight children born to the marriage, five of whom lived to adulthood and all of whom went to America.

L. Henry–as he is known to posterity–was a pivotal figure in the development of Wheatland, Iowa as a “new Wunderthausen” and of the German Reformed church there that served as a nucleus of the expat community.

The transition to America began when L. Henry was still a boy. In 1833, an Althaus aunt went to America and was soon married to a Gerhardt who had come from the neighboring village of Elsoff. Then in 1844, Henry’s younger brother J. Ludwig and cousin Ludwig Dürr crossed the Atlantic and traveled on to Crawford County, Ohio, where the Gerhardts lived (with several other Gerhardt families). In 1845, the entire Riedesel family with others left Wunderthausen for Ohio. The party included L. Henry’s young family, the relatively aged parents, three of his siblings plus brother-in-law Franz Homrighausen, and J. Ludwig’s fiancé Catherine Schneider.  This article gives a fuller explanation of how they wound up on the Ohio frontier. The name of their ship is lost but it docked in New York out of Bremen on June 7, 1845.

The family spread around Crawford County either renting land or working for others. They lived in the country though were close to the town of Galion which is often a reference point for the family.

Two or three years–there is no precise record–after the family arrived, a number of them fell victim to an epidemic. They included Henry’s wife Maria Amalia, their young daughter Anna Elisabeth, and Henry’s parents. Where they were buried was almost lost to history but we now have a plausible surmise as explained in this paper.

Henry was now left with two young sons, John Albert having been born at Galion. As of 1850, the baby was in the care of Henry’s sister Anna and family, while the older son Ludwig/Louis lived with him.

Some time in 1852, Henry and his younger brother George set out by foot for eastern Iowa. As far we know they had no prior connection to what became the town of Wheatland on the western edge of Clinton County but that is where both brothers acquired  land patents. Henry’s patent for 160 acres is dated May 1, 1852. The family story is that the brothers returned to Ohio by steamboat and railroad rather than walking, having spent less than planned.

The land was now theirs but years would go by before they were all farming around Wheatland. Henry took a second wife in Elisabeth Schumacher on November 21, 1854 there at Galion (the same day he was naturalized!). She was the descendant of emigrants from the village of Elsoff a century before; it seems unlikely yet I am certain that the Gerhardts of Elsoff had somehow remained in contact with the Schumachers in America–which is why the Gerhardts headed straight to Ohio in 1833. Elisabeth herself was born October 2, 1831 in Pennsylvania.

Henry and Elisabeth moved on to Wheatland in what was probably early 1855. Son William was born there that fall and four more children followed. Sadly, their only daughter also died in childhood. Henry could still claim six robust sons.

A Man of the Church

Though the system was gradually breaking down, the religion practiced in a German state such as Wittgenstein was determined by the rulers and had been for almost 200 years. The Counts of Sayn-Wittgenstein opted for the Reformed/Calvinist confession so that is what most of our forebears knew and practiced. The rulers chose the pastors, regulated the churches, and kept an eye on what was being taught in catechism. In Henry’s time, the resident pastor lived in the village of Girkhausen. Wunderthausen and Diedenshausen had churches, but they were used only occasionally. The peasants of the latter two were expected to trudge several miles over the mountains and though the forest to the mother church in Girkhausen for Sunday Gottesdienst; how many actually did, I can only guess.

These were not conditions conducive to deeply felt religious convictions, but the seed was planted with Henry. If not in Germany, then in Ohio he was inspired to take on a leading role in the religious life of the community (mostly family) around him. Sources say that he studied theology with the Rev. Max Stern in Galion. After the Riedesels had begun settling down in Wheatland, reports say that Henry led services in his own home. In the late 1850s a church was organized under the auspices of the Presbyterians with Henry playing a leading role. The Presbyterian minister they hired proved not to be strict enough, so the affiliation was ended and a new German Reform congregation named for St. Paul was organized in 1861. 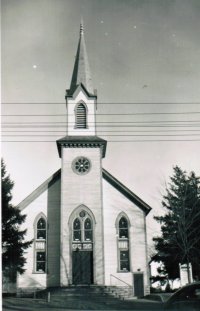 All of the leaders of the congregation were men from Wunderthausen, including L. Henry Riedesel as a Trustee. He continued in lay leadership throughout his life, and his youngest son–Charles Henry–would himself be ordained in the German Reformed Church. Henry donated a parcel of land for a burying ground. St. Paul’s Cemetery was expanded over the years but got its start as a gift from Henry. He was also a generous giver. So were others among the Riedesels and the larger Wheatland community, but his role in creating and sustaining this central institution cannot be overstated.

A few years later, Henry would for the second time bury a wife. Elisabeth died April 5, 1887. Henry lived until July 30, 1894. Of course they are buried together in St. Paul’s Cemetery.