Clicking on the thumbnails below will open full-size images.

Several other lines of knightly Riedesels are known from the 1300s onward, but all were extinct as members of the lower nobility before 1700. Not every member had the status of a Ritter (knight) and their lives were far from glamorous. They might have owned some property around the small towns where they were based (e.g. Josbach), but were dependent on the landed nobility for jobs as administrators or hired swords.

I believe that the Camberg line was relatively independent of the others while the Riedesels of Bellersheim, Vers and elsewhere were rooted in the Josbach line. Their names–dozens of them–are scattered across the documentary record but few physical traces of these Riedesels remain. 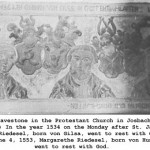 One of the more prominent “others” was Johann Riedesel zu Josbach who died about 1559. He is buried with his two wives, Anna von Gilsa (d.1535) and Maragarete von Hund (d.1553) in the Protestant church in Josbach, Hessen. This picture is of the gravestone for Johann and his wives.

“Coat of arms” is an English term that does not quite match the German institution of Wappen. These were fairly simple heraldic figures based on a shield. The basic Wappen of all Riedesels includes a donkey’s head with leaves (usually three, presumably thistle) in its mouth. In the insignia of the Riedesel zu Eisenbach, the donkey faces forward; in the other lines, it often faces to the side.

Behind the tomb of Otto von Hindenburg in St. Elisabeth’s church in Marburg is a table of arms of the ancient Deutscher Orden, or Teutonic Knights. It includes several Riedesel shields. The shields show the dates of their induction into the Order. (Viele Dank an meinem Freund Stefan Riedesel für diesen Bilder)