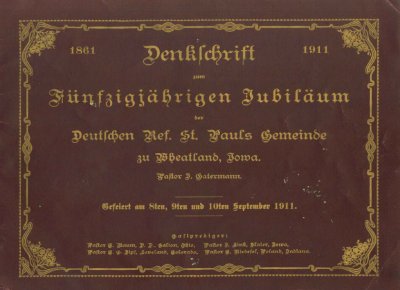 The historical booklet published in 1911 in connection with the 50th anniversary of the founding of St. Paul’s Church in Wheatland is a priceless document of a time and place. Few of the founders were still alive but the congregation hung on to the German language and forms of worship. All signs were of a healthy, multi-generational (as we would say today) community.

The clouds of war that would dash all pride in being German-American were barely visible on the horizon though they would arrive.

Most of the history is written in German and printed with the old “blackface” type. Copies still sit in Wheatland attics and basements but few people can read them. To keep this unique document alive, I am providing a scan of it as well as an English translation with notes. (A higher-resolution version of the booklet is available by contacting me).

The following is a paper recounting the background behind the founding of St. Paul’s Church. While emigrant churches were common, several unique conditions lay behind the link between St. Paul’s and one small village in Germany.