Ludwig Riedesel was born February 21, 1784 in Weymers house in Wunderthausen. He was the fifth of eight known children of Johannes and Maria Elisabeth (Dienst) Riedesel. On February 18, 1818 he married Florentine Althaus. As she was the oldest child in her family, Ludwig would become the tenant of the small house known then as Haase. They may have owned some property, but most land was owned by the ruling Sayn-Wittgenstein family and essentially leased back to the peasantry in exchange for money, produce and extensive services. Ludwig’s father-in-law (and thus the head of household) died in 1824 but Frau Althaus lived until 1842 and still retained some privileges.

By this time, Ludwig and Florentine had had eight children, five of whom were still alive. The oldest, L. Heinrich, had married in 1841 and was living in “Haase” as well.

In 1833, a sister (Maria Elisabeth) of Florentine’s had gone to America where she had married Christian Gerhard of the neighboring village of Elsoff. Another sister of Florentine’s (Elisabeth Gertraud) had son named Ludwig Dürr born in 1823; they also lived in this small house.

In 1844, the second son of Ludwig and Florentine, J. Ludwig (born 1822) and his cousin Ludwig Dürr went to America–all the way to Crawford County, Ohio, where the Gerhardt clan had put down roots.  Ludwig Riedesel sold what there was to sell to a Daniel Müsse and the house became known in latter years as “Müsse.” The name of their ship is lost but it docked in New York out of Bremen on June 7, 1845.

In the history of emigration from Wunderthausen to the U.S., this was a very rare case of three generations coming together. At the age of 61, Ludwig had 50 years of hard work behind him and it was also the exception for anyone much older than 30 to start over in America.

The details are lost to history, but we know that Ludwig, Florentine, and other family members died between 1847-1848 in an epidemic (there are no county records from the time). There were said to have been buried in the “Settlement Cemetery.” Only in 2013 were researchers able to pinpoint a likely location for this long-abandoned burying ground. I have written a detailed account of the search with maps to the likely location.

These few facts are all anyone has about the couple. I would note that Ludwig was born a subject of the Count Sayn-Wittgenstein-Berleburg. During the Napoleonic wars (in which he lost a brother), he was for a while ruled by the French. Initially following the Congress of Vienna in 1815, Wittgenstein belonged to the Grand Duchy of Hesse but was soon swapped to Prussia. By 1845, Ludwig was legally a Prussian citizen (all this without ever leaving home). He died on the free soil of Ohio. He saw little of the “milk and honey” but his progeny prospered well in this new land. 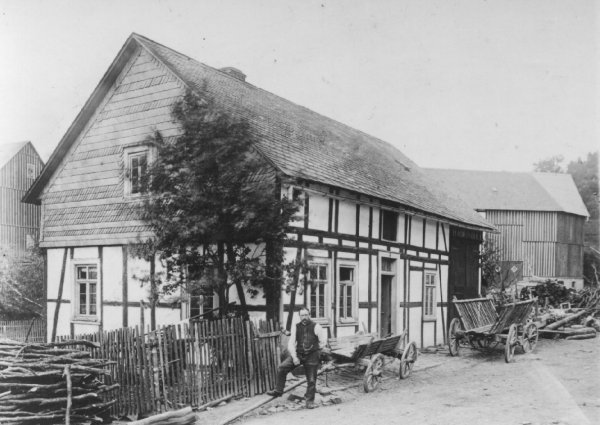