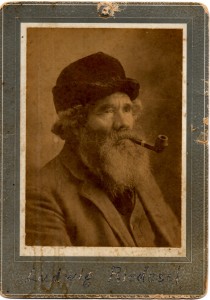 Johann Ludwig Riedesel was born August 5, 1822 in the small Wunderthausen house known then as Haase. He was the third child and second son of Ludwig and Florentine (Althaus) Riedesel. His father had inherited the tenancy through marriage. Following local custom he was known by his middle name. Likewise, his first name was not Johannes–that spelling was reserved for a “John” with no middle name. He was your author’s great-great grandfather.

These were hard times for peasant farmers in places like Wittgenstein. While they were gradually being freed from feudal obligations, economic development elsewhere in Prussia made them relatively worse off. The poor soil could never quite sustain the population, even with constant out-migration. Still, it took no little courage for the parents and young adult children to leave their world behind to start over in America.

In 1844, J. Ludwig set off for America in the company of his first cousin, Ludwig Dürr and the latter’s single mother, Elisabeth Gertraudt Althaus. She was J. Ludwig’s aunt and they had all lived together in Haase house. They traveled to New York on the ship Lesmona out Bremen, landing on June 24, 1844, but their destination was Crawford County, Ohio, where another aunt, Maria Elisabeth (Althaus), and uncle, Christian Gerhardt, were living (the nature of this connection is a good story). There is no record of how they got to Ohio, but it is likely they (and their families that followed) traveled by water rather than overland whenever possible. This could have taken them on the Erie Canal, Lake Erie, and perhaps the Sandusky River.

The following year, all of the immediate family left Wunderthausen to come to Crawford County. Also in the party was Catherine Schneider whom J. Ludwig married on July 1, 1845. As far as we know, none of the Riedesels owned property in Ohio, but either worked for other farmers or rented land. This was in the Jackson Township close to both Crestline and Galion. J. Ludwig was naturalized in Crawford County on November 11, 1854.

There is good evidence that the Riedesel and related families organized their own religious community with a meeting house and a burying ground. Even if they could have afforded to hire a minister (which they could not), German Reformed pastors were in short supply. Father Ludwig, mother Florentine and others died in an epidemic of some kind and, to our knowledge, were buried in what is now a cornfield outside of Galion.

J. Ludwig and Catherine remained in Ohio until early 1855 when they moved on to the Wheatland, Iowa, area where all of his siblings were to settle.  The family story is that they saved the ferry boat fare by walking across the frozen Mississippi (that seems doubtful, though other rivers may have been iced over). They had four surviving children by this time and five more were born to them at Wheatland (three unnamed children died young). They owned 160 acres of land north of Wheatland in the Liberty Township (section 32).

He is recorded as a founding member of a Presbyterian-affiliated congregation (Gemeinde) in 1857. That body wasn’t strict enough, apparently, and was replaced by the new St. Paul’s German Reformed Church in 1861. J. Ludwig was not as prominent in that church as his brother L. Henry, but it was unquestionably the center of the tight community of expatriates from Wunderthausen. In 1881, they moved again to a place north of Glidden, Iowa in Carroll County. Three of their sons (and a few other Wunderthäuser) had farms there. Catherine died in 1894 and J. Ludwig subsequently lived with various family members. At the end of his life he was living with his daughter, Florentine Beckman in Wheatland, but died on January 12, 1910 at a hospital in the county seat of Clinton. J. Ludwig and Catherine are buried in the Merle Hay (aka West Lawn) Cemetery at Glidden. He had outlived all of his siblings.

We have almost nothing to go on regarding J. Ludwig’s personality, but I will make some suppositions anyway. First-born L. Henry appears to have been the “go-getter” in the family and perhaps the most assimilated. He was probably not the life of the party. J. Ludwig also worked hard and helped keep his large family on the straight-and-narrow. But he may have been just a little more footloose and laid-back. Of the four brothers, only he continued to wear a beard. There is a strain of humor in our family that came from somewhere. 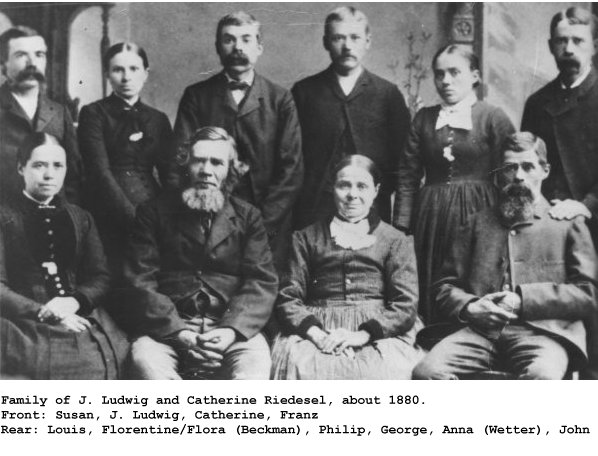