Heinrich Gustav Riedesel was born September 16, 1893 in Wunderthausen to Johann Georg and Katherine (Riedesel) Riedesel. His father was by then the owner of the house and property known as Weymers. He was the tenth of eleven children.

The entire family emigrated to America in the early 1900s. His sister Emilie Lisette had gone in 1902 as a newlywed and sister Luise went in 1903. The remaining family traveled on the ship Rhein out of Bremen, landing in New York on October 25, 1906. In America he was known as Gus(tave).

He lived and worked on the family farm for ten years after emigrating. On December 17, 1918 he married Emma Mildred Wulf who had been born August 30, 1900 in Jackson County, Iowa. They continued to live with his parents for some time though he eventually had his own farm south of Wheatland. Two sons were born to the marriage. Gus was naturalized  on August 10, 1942. German–and specifically the Wunderthausen dialect–was spoken in the home for many years. 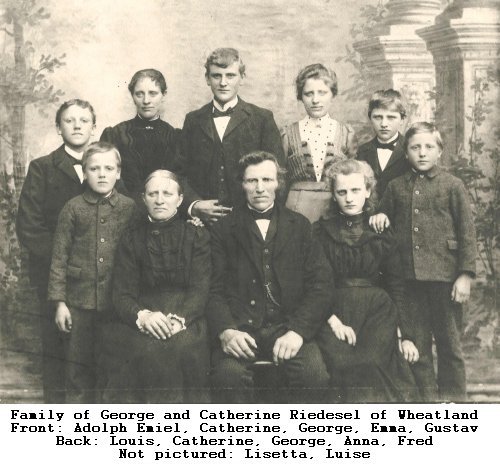