Emilie Lisette Riedesel was born January 24, 1879 in Wunderthausen to Johann Georg and Katherine (Riedesel) Riedesel. Her father was by then the owner of the house and property known as Weymers. She was the third of eleven children though her oldest sibling died before she was born.

On April 1, 1900 she married the widower Georg Ludwig Kroh. He had just returned to Wunderthausen after living in America for many years. Insofar as he is said to have sold his property at Wheatland and brought three of his American-born children with him, it seems unlikely that he intended to go back to America any time soon. But after having one child in Wunderthausen, George and Lisetta (to use their American names) and the children were on the ship Bremen headed for New York where they landed on September 24, 1902. They were soon at Wheatland where four more children were born.

Obituary of Lisetta (Riedesel) Kroh
Detailed Ancestry
Ancestry of George Kroh
Descendants
I believe this map shows the Kroh farm as of 1925.
This Kroh Flew Away Twice: Draft of an article (in English) about George’s unusual immigration history.
Lisette and her sisters Emma and Hermine 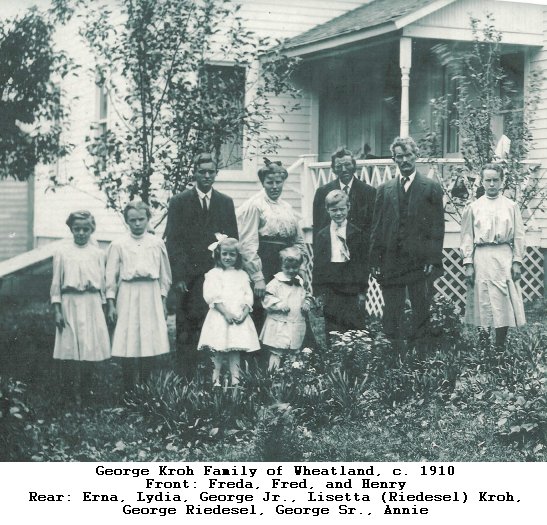