Many contemporary documents–ships’ lists, Census records, even grave markers–give “Prussia” as the place of origin of our people from Wunderthausen and elsewhere. This has often led the naive astray into thinking they were “Russian” or maybe from Berlin. As of 1947, Prussia as a place no longer existed.

Most narrowly, (Brandenburg) Prussia was a state in eastern Germany with its capital in Berlin but at times stretching hundreds of miles further east. It rose to become a relatively-great power among the European states by the time of Napoleon. After the final defeat of the French, the major German states divvied up the small ones and what had been the tiny but independent Counties of Wittgenstein were absorbed into greater Prussia. This map shows the extent of the Prussian state with the Rhine Province (now including Wittgenstein) in red. Here is a similar map for Pomerania.

Thus from 1816 forward, the Wittgensteiners (and Pomeranians and many others) were legally citizen-subjects of the King of Prussia. Of course they were ethnically German but in terms of political identity they were Prussian. By 1871, Prussia had merged all of what we think of as Germany into a single state known as the German Empire. The tragedies of the 20th century need not be recounted here.

In German, the state’s name was Preußen (pronounced Proy’ – sen). A Prussian was a Preuß.

The Wikipedia article, as always, is rich: https://en.wikipedia.org/wiki/Prussia

If you spend any time at all with the old records from a village like Wunderthausen, you will notice a couple of things:

My old joke was that they were so poor they didn’t have enough names to go around, but there is real explanation for this phenomenon. As a rule, a baby was named for his/her same-sex godparent. Over the generations, this meant that the same names (first & middle) were reproduced over and over.

Most–but not all–children had a first and middle name, but it was extremely common that they were known by their middle name. My g-g-grandfather was christened Johann Ludwig Riedesel but most knew him as just Ludwig. The first name was very often a saint’s name (a holdover from before the Reformation perhaps): Maria, Elisabeth, Anna, Johann, Georg. But they were called by their middle names. The German word is Rufname, literally “call name.” A family could well have sons named Johann Georg, Johann Friedrich, and Johann Jost–none of them known as Johann but rather Georg, Friedrich and Jost.

If they wanted to call a son after Saint John, they would simply name him Johannes with no middle name. Conversely, a boy would not be christened Johannes Something but just Johann Something.

Other useful notes from Wunderthausen and Wittgenstein:

I have what I feel are virtually complete records of all the Riedesels (and Rietesels) who emigrated to America. With a few exceptions I know a lot about their ancestry and usually have good data on the next couple of generations in America. Get in touch and I will be glad to share what I have (and for free).

Quite a number of American descendants of the Wittgenstein Riedesels (and other families) have enjoyed traveling back there. Keep in mind that this is still a rather rural area. The principal town of Bad Berleburg has only around 5,000 residents and the surrounding villages often have fewer than 1,000. This is not Berlin or Rothenburg or the Rhineland where tourism is a huge business and English is widely spoken.

That said, I would be glad to consult with you on travel plans. I have excellent contacts in Wunderthausen and can assure you of an hospitable welcome. Feel free to contact me by email.

The town of Bad Berleburg (pictured below) maintains a website for tourists but you can understand that it is all in German. The community of Erndtebrück also has a tourist area on its website (also in German).

Where John Henry, Peter and Marie (Zehner) Riedesel came from is now part of France and no Riedesels live there any more. There are a few Riedesels in Western Pomerania (Vorpommern) around Stralsund and the island of Rügen. Unfortunately I have no contacts there. 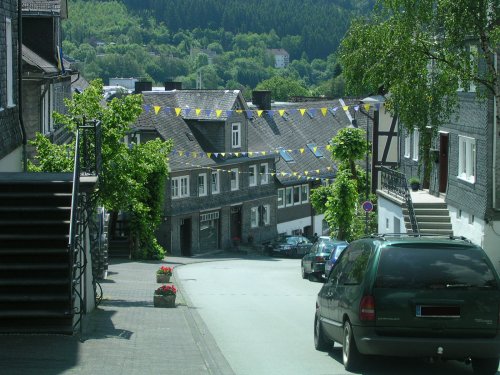 A necessary condition for the mass emigration was increased opportunity to do so. German peasants were actual freer to come and go than in feudal times. A burgeoning transportation/emigration infrastructure of trains, safer trans-Atlantic ships, and emigration agents facilitated the movement. And the United States offered unprecedented economic opportunities. Rural areas such as Wittgenstein did not benefit from the industrialization and urbanization elsewhere in Germany, creating economic disadvantages.

By the 1800s, strictly religious motivations for emigration were of limited importance. “Follow the money”, as they say.

Absolutely not. Of the various branches of Riedesel knights known since the 1200s, only one achieved the higher status of Baron or Freiherr for all its male members. This was the Riedesel zu Eisenbach. Holy Roman Emperor Leopold  I granted this dignity in 1680 to most of the adult men of the family (there was never a singular Baron). The diploma documenting this honor refers to them throughout as “Riedesel zu Eisenbach.” When a person or lineage was so promoted, they would normally be explicitly granted the “von.” But the Eisenbach line already had a name.

This family almost never used the “von” in their names. General F. A. Riedesel of Revolutionary War fame is often referred to as “von Riedesel” in American historical literature but that is simply wrong too, per the German records.

By the mid-1800s, anyone could call themselves “von Riedesel” or “von Fledermaus” but that did not mean they were recognized as such by the hereditary nobility. And as noted in many places, we American Riedesels have no blood relationship to this family anyway.

See my further rant at: Why von is Not Correct. 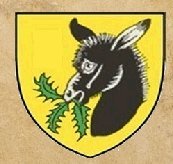 That’s easy in German – reet’ ay zl – with a good rolled R. Listen to this example.

Esel means donkey and is without question a root word in our name. Thus in German, the “d” or “t” sound from ‘Ried’ stands apart from the second component of ‘Esel.’

In the US, the pronunciation evolved in a number of ways in different families and places. No one is more correct than another though it is polite to try to match what a Riedesel friend actually says. Some examples:
* Ruh day’ zl or Ree’ day zl are used in parts of Iowa
* My family became Ree’ dess ull (rhymes with Sea Vessel) about 1914
* Ruh dess’ ull is not uncommon

Where some acquaintances get “Rye-diesel” I don’t know, and I try not shudder. I mean, there is a place for bio-fuels but they were not part of our heritage.