A necessary condition for the mass emigration was increased opportunity to do so. German peasants were actual freer to come and go than in feudal times. A burgeoning transportation/emigration infrastructure of river boats, trains, safer trans-Atlantic ships, and emigration agents facilitated the movement. And the United States offered unprecedented economic opportunities. Rural areas such as Wittgenstein did not benefit from the industrialization and urbanization elsewhere in Germany, creating further economic disadvantages.

By the 1800s, strictly religious motivations for emigration were  still present, but of limited importance. A good number of Wittgensteiners–though no Riedesels that I know of–joined the Amana Colonies in Iowa. “Follow the money”, as they say.

If you have at least a reading knowledge of German, I would strongly recommend a recent book written by my friend and colleague, Heinrich Imhof. It is an impressive study of the migration from Wittgenstein to the United States with the title Hoffnung auf ein besseres Leben: Die Auswanderung aus Wittgenstein nach Amerika im 18. und 19. Jahrhundert. Information is available on a webpage of the Wittgensteiner Heimatverein (scroll down the page a ways). 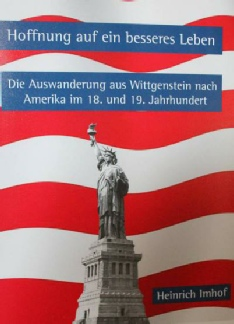