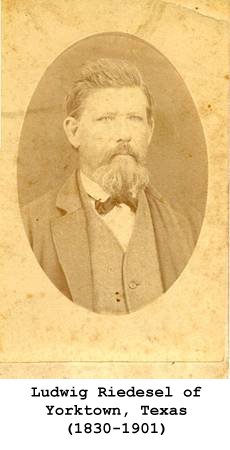 Ludwig Riedesel was born January 20, 1830 in the village of Erndtebrück in southern Wittgenstein. He was the youngest of six known children of Johannes and Marie Elise (König) Riedesel. Johannes was a shoemaker; leather trades ran in the family. With four older brothers, August would not be in line to inherit the family house/shop or whatever meager land they owned.

He came to America as a young man, ahead of his older brother August. He traveled to the port of New Orleans on the ship Julius out of Bremen. The ship arrived on October 31, 1849, and his occupation was listed as a shoemaker. Like many others from the Erndtebrück area he was aiming to settle in Texas. He settled around Yorktown in DeWitt County.

On January 2, 1852 Ludwig married Justine König who was also a native of Erndtebrück. I have not been able to trace her heritage very far but she was born March 2, 1828 to Johannes and Christine König. The couple had six children I know of.