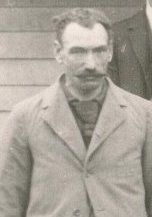 Friedrich Riedesel was born June 4, 1861 in Diedenshausen. He was the first child of Georg Ludwig (Louis C.) Riedesel and Wilhelmine Elisabeth Peter (known as Katherine). As a young boy he came to the U.S. with his parents on the ship “Humboldt” out of Bremen arriving in New York on May 27, 1867. The family settled south of Wheatland.

Friedrich was naturalized in Scott County, Iowa in 1889 and married Christina Horstmann on April 15, 1891. She was a native of Hamburg and was born on October 2, 1870. They eventually had seven children, all but one of whom lived to adulthood. They lived in the Spring Rock Township of Clinton County, near Big Rock. Friedrich worked on the railroad.

He died May 28, 1910 at Wheatland. Christina survived him by many years, dying on December 8, 1958. She supported herself in later years as a telephone operator. They are buried in St. Paul’s Cemetery in Wheatland.