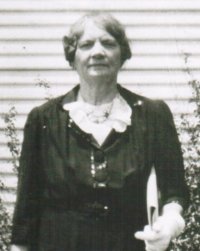 Marie Riedesel was born August 30, 1880 in Paris though her parents, Peter and Anna Gertrud (Jacob) Riedesel were German nationals. She was the third of five children in what was a second marriage for her father. We believe that she came to America following her mother’s death in 1895.

She worked as a maid for the Roth family in Chicago, and eventually married a son of the family. He was mentally unstable and the marriage ended in divorce. She then married Adam Zehner on June 16, 1904. They lived in various places but settled in Memphis. They had five children but were divorced around 1926. In 1930, she and her daughter Celia were living at Stigler, Haskell County, Oklahoma. Her oldest son Albert and daughter Margaret were in Memphis, Tennessee.

She moved to the Chanute, Kansas, area in 1946 where she belonged to the Christian Church. Her sons Earl and Theodore lived there as well. Her place of death on November 9, 1972 was the Labette County Medical Center (Kansas). She is buried in the Memorial Park Cemetery, Chanute.