Karl Riedesel was born March 24, 1854 in Erndtebrück. He was the third son/child of Johann Heinrich and Maria Elisabeth (Wiekel) Riedesel. There were to be a total of 12 children in all but only Karl and his sister, Luise, went to America. Johann Heinrich was a shoemaker, a trade Karl would follow. Even German records are inconsistent in spelling his name as Carl or Karl.

He was mustered into the royal Prussian second Hessian infantry regiment on December 12, 1874, and was honorably discharged not quite two years later on September 1876. He incurred no fines or disciplinary actions. He appears not to have seen any military action, as the wars that led to the unification of Germany under Prussian domination were complete in 1871. The military record also spells his name with a “C.”

A Carl Riedesel (with a “C”) arrived in New York on the “Belgenland” on July 15, 1880. He was 26 (just right for Karl) but seemed to have no companions with Wittgenstein names. His occupation is listed as that of a farmer. He first settled in Carver County, Minnesota, near Minneapolis, and worked as a farm laborer. In 1882 he moved to Crookston, Minnesota, where he was employed in the harness and shoe-making business. In 1889, Carl established his own shoe-making business. He was an active participant in civic life, having served on the school board and city council. He was a member of several fraternal organizations including the Masons and Oddfellows.

In January 1883, he was married to Margaretha Reinhardt in Crookston. She was of German birth but I have been unable to trace her parentage. They had eight children, seven of whom grew to adulthood. 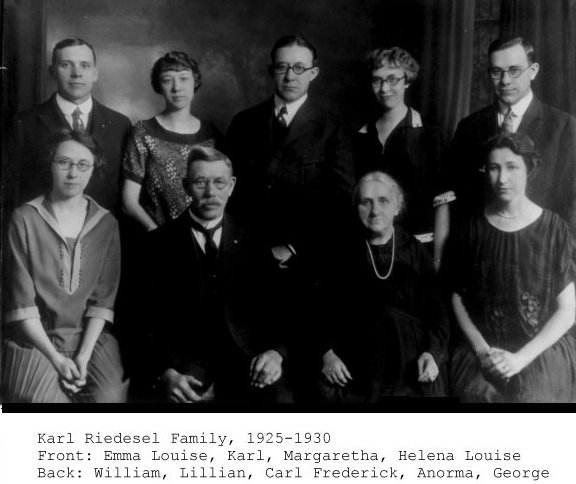 Photo from about 1889
Grave marker in Crookston
Ancestry
Descendants