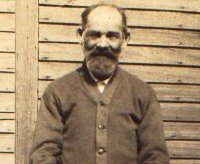 Johann Georg Riedesel was born November 27, 1844 in Wunderthausen as the sixth child of Georg Gabriel (aka Ludwig) Riedesel and his first wife, Elisabeth Amalia Knoche. His parents lived in the new house known as Schreiners or Großeludwigs. We know nothing of his early life until  he arrived in New York on the ship Hansa out of Bremen on October 27, 1865. His older brother, Johannes/John H., had come to America in 1854 and was established as a farmer near Wheatland, Iowa. George initially lived with his brother though eventually acquired land of his own. Like two of his other brothers, he took the middle initial “D.” which had no particular meaning but helped the bank keep track of all the similarly-named Riedesels.

On October 28, 1881 George D. Riedesel married Susanna Mörchen, the daughter of earlier emigrants from Wunderthausen;  Johannes/John and Catherine (Bernhardt) Mörchen farmed near Lowden just west of Wheatland in Cedar County. Susanna was born April 7, 1860. They had a total of five children.

For reasons unknown, the family relocated to Moore, Oklahoma (Territory), by early 1900. This included all four surviving children. Both George and Susanna lived to be 88 years old. He died December 18, 1932 and she died August 11, 1948. They are buried at the Smith Cemetery at Moore.