Georg Ludwig Riedesel was born May 13, 1817, in Wunderthausen in the house known as Wetzels. He was the eighth of nine recorded children of Johann Ludwig and Anna Elisabeth (Knoche) Riedesel.

An older sister, Catherine, came to live in Warren County, New Jersey in 1837. His petition for naturalization states that he came in 1841. He married Caroline Schaeffer (probably Schäfer) around 1845. She was born August 16, 1824 in Germany. One source gives Wunderthausen as her place of birth but I think this incorrect. No Schäfer daughter is recorded in the birth records at this time–and no Schäfer family even lived in the village.

Several of the Riedesels who settled in Warren County came to be known as Riddle or Radle. It’s not that there weren’t other Germans around who could pronounce (and spell) Riedesel correctly, but this seemed to be the rule. Ludwig (or Louis) farmed near what was called Oxford Furnace

They had at least seven children before Caroline died in 1867. Their youngest known child, Louis/Lewis, died the same year. Within three years Ludwig had married again to Catherine Riddle–the daughter of another Wunderthausen Riedesel whose last name was similarly modified. Catherine was born May 9, 1838 in New Jersey, the daughter of Johann Georg Riedesel and Anna Catherine Riedesel (her birth name) who settled in New Jersey earlier. She had been married to Adam Stoch though evidently divorced after having at least three children. Ludwig and his new wife had three more children. There is no consistency in the last names by which the children were known. Some used Radle, some used Riddle.

The evidence is circumstantial but it appears that the second marriage broke up. As of the 1900 Census, Ludwig was living with his son Christopher and listed as widowed. Yet we find Catherine in 1910 living with her sister and brother-in-law, Louisa and Cornelius Brokaw. Ludwig died February 27, 1903 while Catherine lived until August 8, 1917. 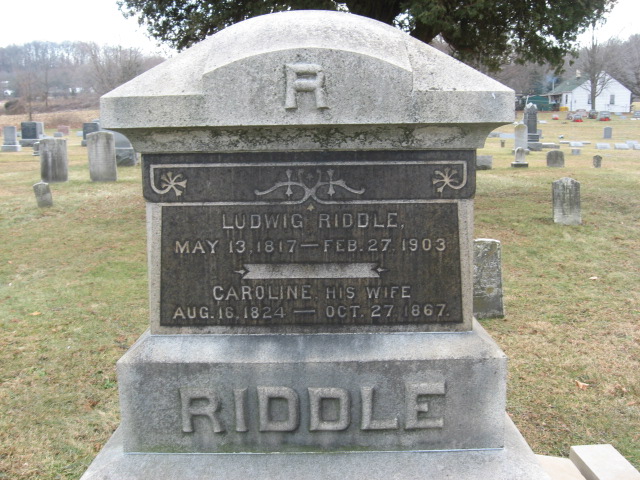 Tombstone with the Riddle Name