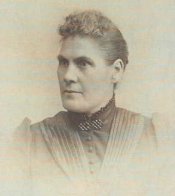 Anna Elisabeth Riedesel was born December 10, 1846 in Wunderthausen. She was the ninth of eleven children of Gabriel and Anna Elisabeth (Müsse) Riedesel of the house known as Bergmanns or Gabels. As many as six of the children eventually went to America (of the eight who grew to adulthood).

It is likely that she is the Anna Riedesel who arrived on the ship Marco Polo in New York on October 30, 1868. She lived in Rochester, New York where she had family and was married there to Jacob Schüssler on May 19, 1870. He was from the neighboring Wittgenstein village of Elsoff. The family eventually spelled the name Schuessler. Anna and Jacob had six children but only Magdalena lived to be an adult. Anna died in Rochester in July 1900 and is buried at the Mount Hope Cemetery there.

Jacob followed their daughter’s family to Cuyahoga, Ohio where he died March 29, 1932. He was an optician who had emigrated in 1867.